English
Loading...
How to use Get the data FAQ

Tax treaties are agreements between states that divide the right to tax cross-border income. They represent a balance between ‘source’ taxation (for countries seeking to tax foreign companies operating within their borders) and ‘residence’ taxation (for countries where multinational companies are based). In negotiating tax treaties, developing economies have often given up a significant amount of their source-based taxing rights, which limits their ability to raise tax revenue.

This site allows users to explore how the balance between source and residence taxation varies, across a dataset of almost every tax treaty signed by developing economies. It enables comparisons between the treaties signed by individual countries, or for groups categorised by income, geography or organisation membership. 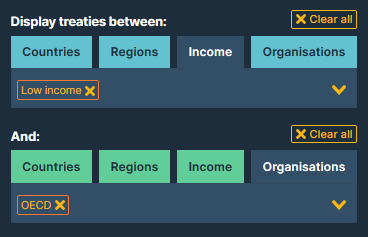 We’ve coded for 28 different clauses, reflecting many of the most important points of negotiation based on model treaties published by the UN and OECD. To help make sense of the data, we’ve also provided a set of indices, which give average values for the overall balance of a treaty (‘index of source taxing rights’), or for a subset of clauses (withholding taxes, permanent establishment, and others). Values closer to 1 mean the treaty leaves more ‘source’ taxing rights on foreign investment intact, while values closer to 0 mean the treaty is more restrictive for the given developing economy. 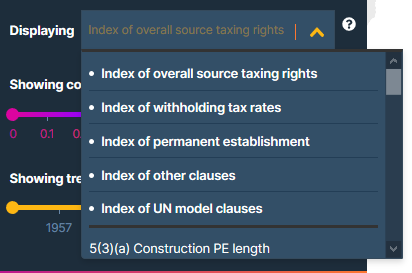 Treaties can be viewed in five different formats.

The visualisations can be downloaded as images, or shared a links that point directly to this site.

In each view, clicking on an individual treaty shows the full detail, permitting navigation through any amendments that might have changed its content since it was originally signed.

The selection of treaties can be narrowed based on the type of treaty and its status. Bilateral and multilateral treaties are includes, as well as amendments through bilateral protocols, and changes resulting from the Multilateral Convention to Implement Tax Treaty-Related Measures to Prevent Base Erosion and Profit Shifting (‘MLI’). The explorer also includes some treaties that pre-date countries’ independence, for example those signed under colonisation.

All treaties in the dataset have been signed, but some are not yet in force, and others have been terminated. Where a treaty has been amended, its original content is labelled ‘Superseded’. 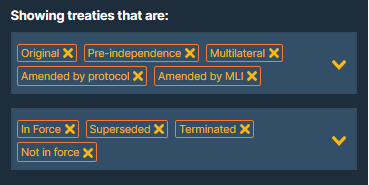 It is also possible to narrow down a selection to a range of values or dates.

This site is a resource for high level comparison. As the coding of treaties and construction of indices involves simplifications and abstractions, it should not be interpreted as a precise or comprehensive account of the legal position on any given clause, or used as a substitute for detailed economic and legal analysis. For more detail, please consult the documentation and FAQ.